There’s a few times of the year that Cinnamon Rolls just call to me. And even though I LOVE eating cinnamon rolls they historically have a reputation for being extremely time consuming. But not any more. I am so excited to introduce you to this ridiculously easy recipe that I am sure you will fall in love with just as much as I have! 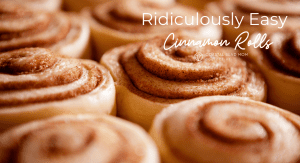 Thaw 12 Rhodes rolls per package instructions. I like to pull them out the night before, and place them evenly spaced on a greased 8×8 pan, cover and place in fridge. This thaws them to be workable but doesn’t create a rise. You could also pull them out a few hours before you need them usually around 3 hours at room temperature. Just make sure to THAW and not RISE. 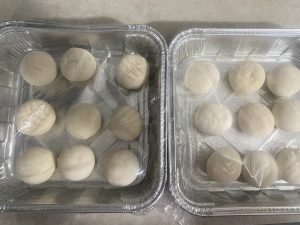 Once the dough balls are thawed you are ready to turn them in to cinnamon rolls! Which is super exciting I know! Melt the cube of butter completely in a microwave safe bowl. In a second bowl mix the sugar and cinnamon. 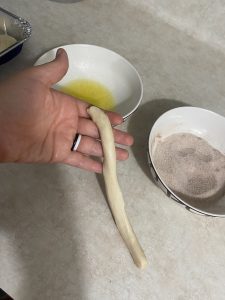 Take the dough balls and roll them in to individual snakes. Dip each snake first in the butter, and then in the cinnamon and sugar mixture. Once completely coated in buttery sugar mixture wrap the snake around in a pinwheel shape.

Place back in your pan and repeat with each roll. 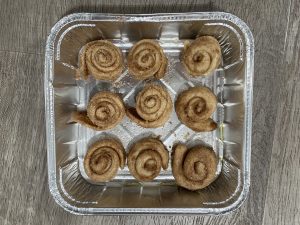 Cover and let rise for 20 minutes while your oven preheats to 350 Degrees.

Bake in oven for 15-20 minutes or until golden brown and baked all the way through! 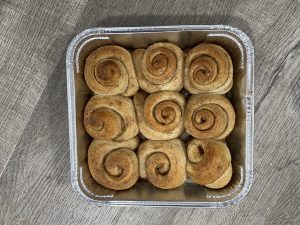 Prepare the perfect maple icing by placing the soft butter in your kitchen aid. Beat the butter until fluffy. Add the maple syrup and mix together. Pour in the powdered sugar and combine until smooth.

Spread and drizzle the frosting on the cinnamon rolls until they are just absolutely the most gooey and delicious things you’ve ever seen. 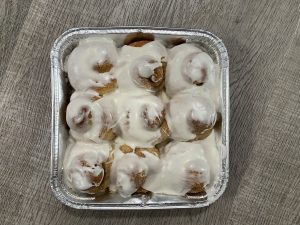 I like to make two pans. One for us and one to share with a friend! For another easy and delicious sweet roll recipe try this one. 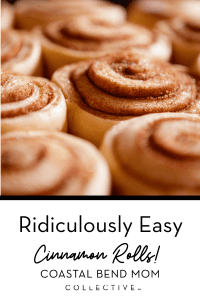 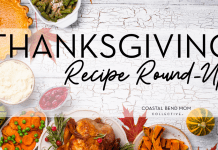