Some might call it a mid-life crisis — but I don’t care.

I’ve always talked about getting “inked”  but I never could actually do it — until NOW. 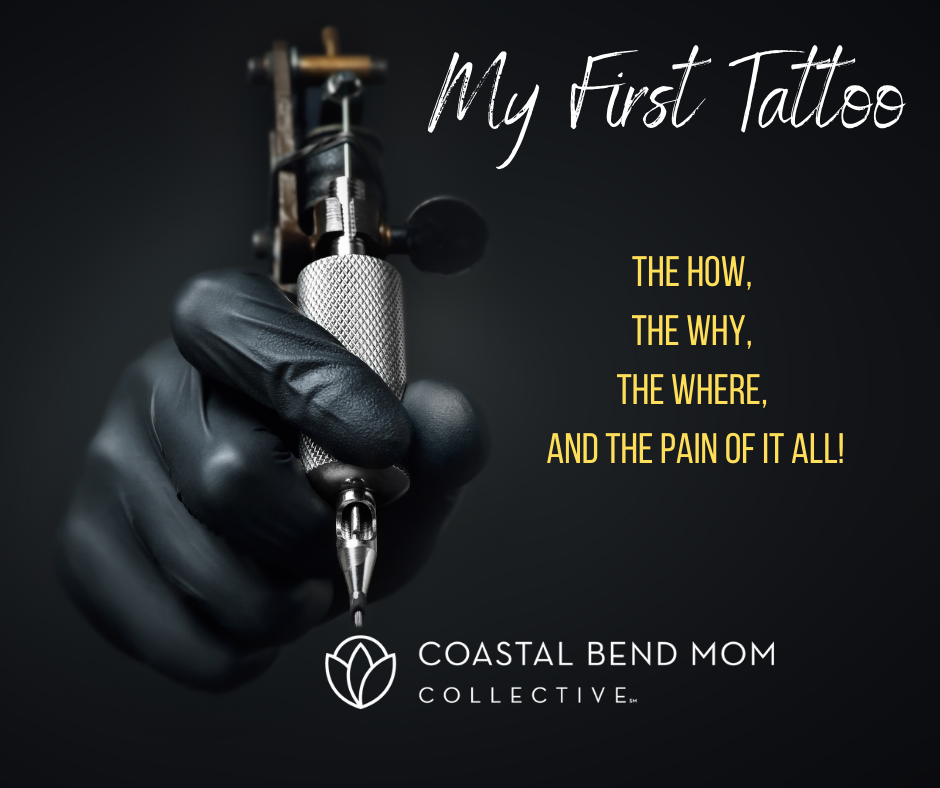 For those of you who follow the blog regularly — you may recall that I TURNED 50!  (today, actually, August 24th).  A year ago, I wrote a blog about all of the things I wanted to accomplish before I turned the BIG 5-0!

One of the items on the mini bucket list was getting a tattoo.  A few days ago — I crossed that off my list.

When it comes to getting a tattoo – it has always been my belief that a tattoo MUST have meaning to you personally.  A permanent reminder on your body of something that triggers certain memories – good or bad.

I think this is why it took me so long to come up with a tattoo that I was absolutely 100% all in with.

Before we got inked (yes, I convinced my hubby to get one with me, too) – we asked around about local artists and did some research about pain, placement, etc.  We decided to get one at Axis tattoo with Michael Casarez because he came highly recommended.  We had to make an appointment – and scheduled it about a week in advance.

Like a typical 50 year old woman – I walked in with a caramel macchiato in my hand on a Thursday afternoon.  After we signed some paperwork — it was time to get started. 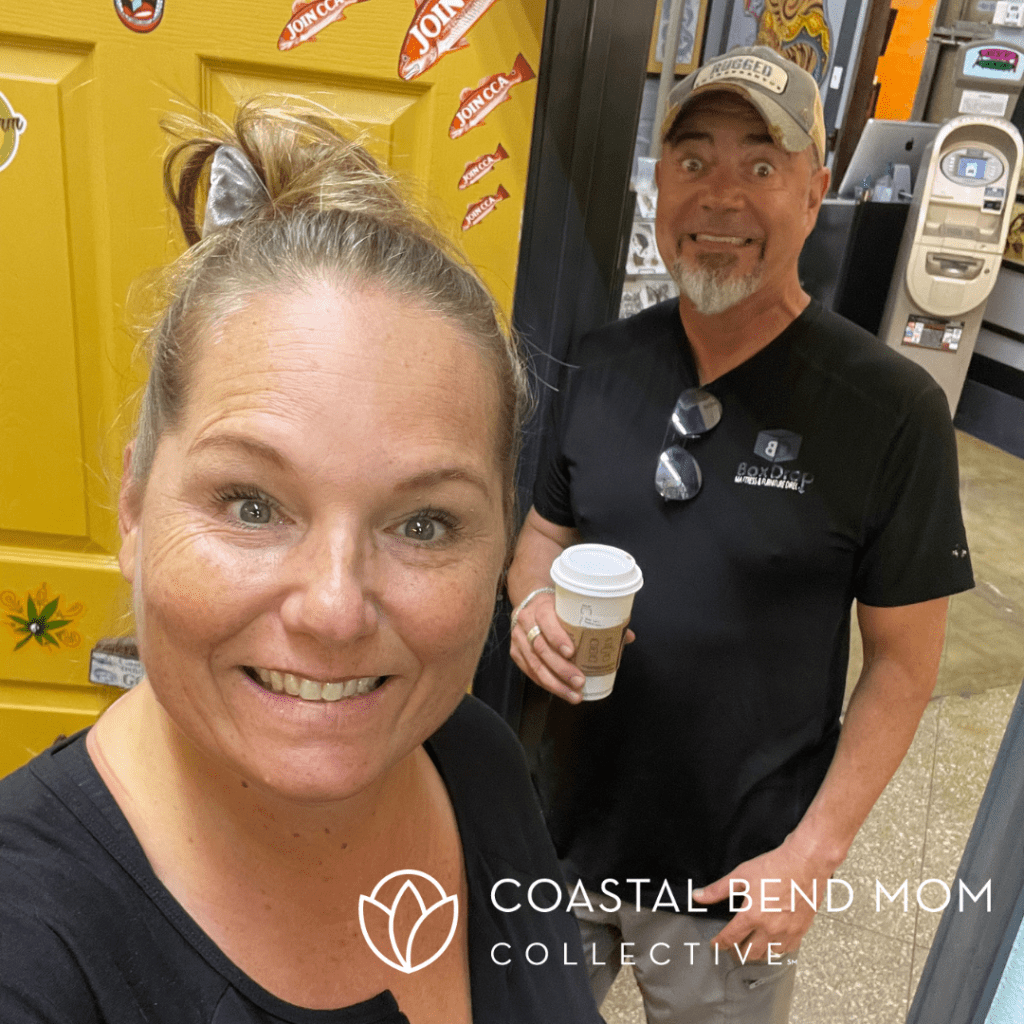 When we made the appointment – we gave Michael our ideas for the tattoos.  He took pictures on his iPad and used an app and an iPad pen to create the drawing digitally.  Then he sized it and made a “transfer” of the designs (kind of like those kids fake tattoos).  He placed the design where we wanted it and made a perfect “print” where he would eventually use his tattoo gun to draw.

I decided to go first — since this was my brilliant idea.  I am not gonna lie — I am a huge scaredy cat about pain — probably another reason why I didn’t get a tattoo sooner.  Because my tattoo was going on the back of my neck — I had to sit in a seat and press my chin to my chest.  When the gun started to buzz right by my ear — I totally jumped and almost quit.  The first strike wasn’t so bad — but as it keeps moving and marking — it starts to really hurt.  Basically — imagine someone taking a knife and slowly moving it up and down your body.  That is how I would describe it. 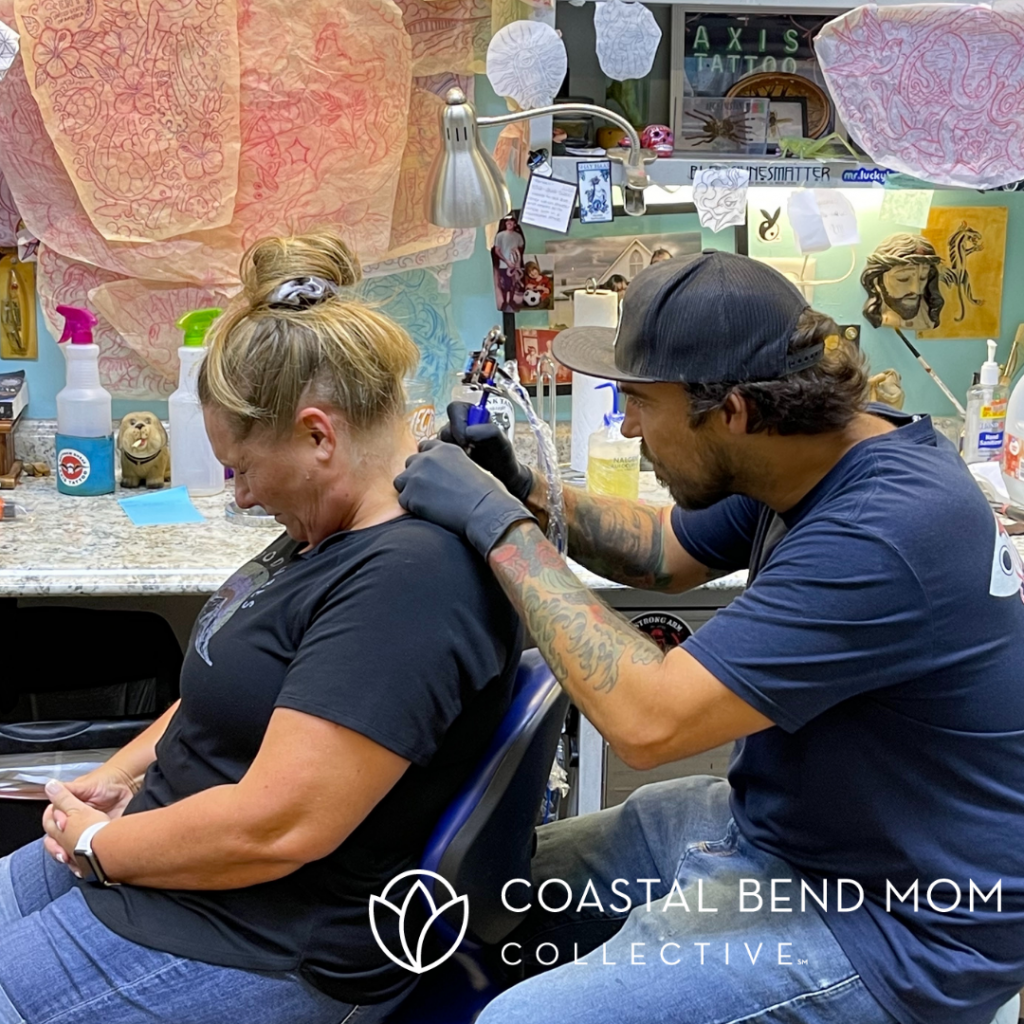 Now my tattoo was extremely simple — and probably lasted 5 whole minutes.  But during that entire time — I clenched my whole face, tightened my whole body just to endure that little bit of pain.  As a result, when I was done — I was very sweaty and feeling dizzy.  I even had to lay down to avoid fainting. Michael said this was completely normal (which  made me feel less of a wimp). 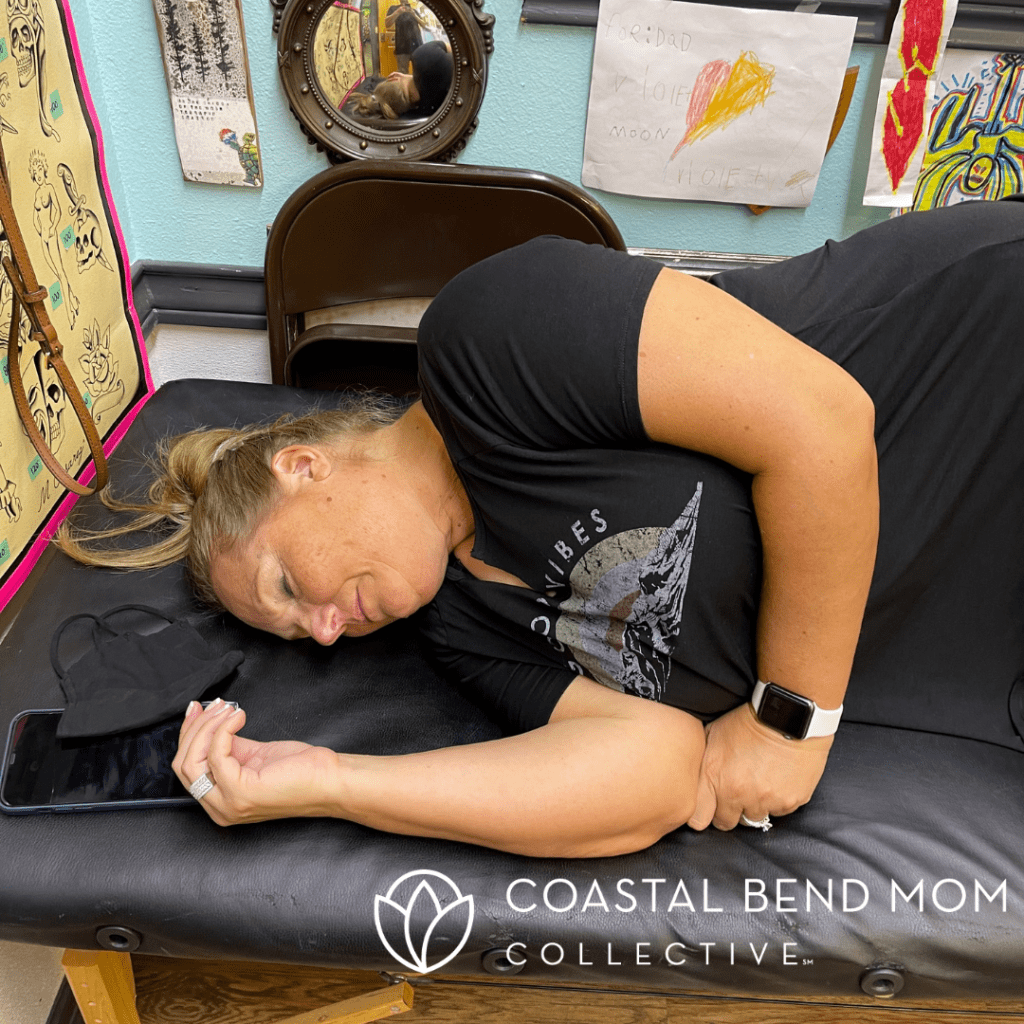 Of course Louie did better than me.

I decided to go with a design our oldest daughter Sierra drew.  If you have followed along on my blogs, Sierra is the oldest daughter of my husband and his ex-wife.  I have been in Sierra’s life since she was 2 years old. 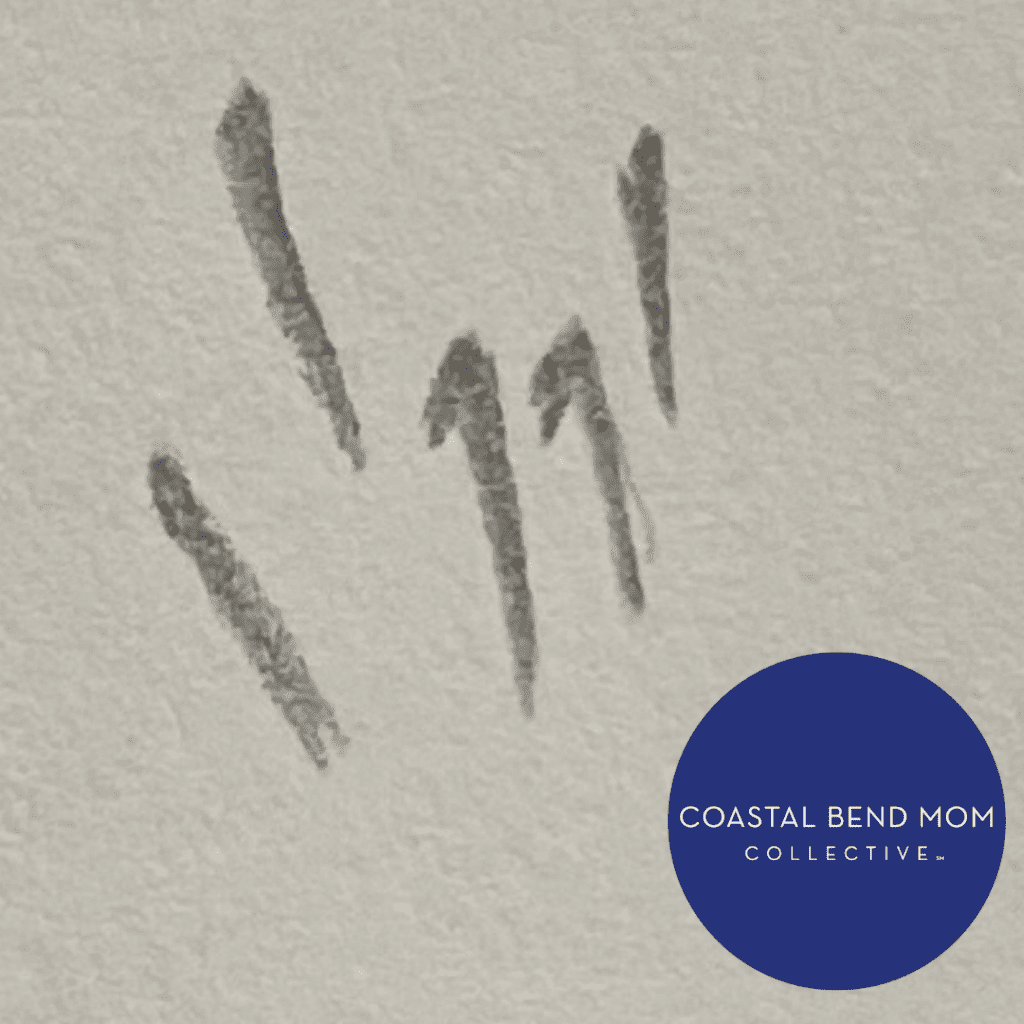 When you have to deal with visitation and drop-offs as a parent and as a step-parent — it can be a very difficult time.  To help with the goodbyes — we used to say “I love you” with the hand symbol in American Sign Language as we were driving off.  I have the symbol on my charm bracelet, too. 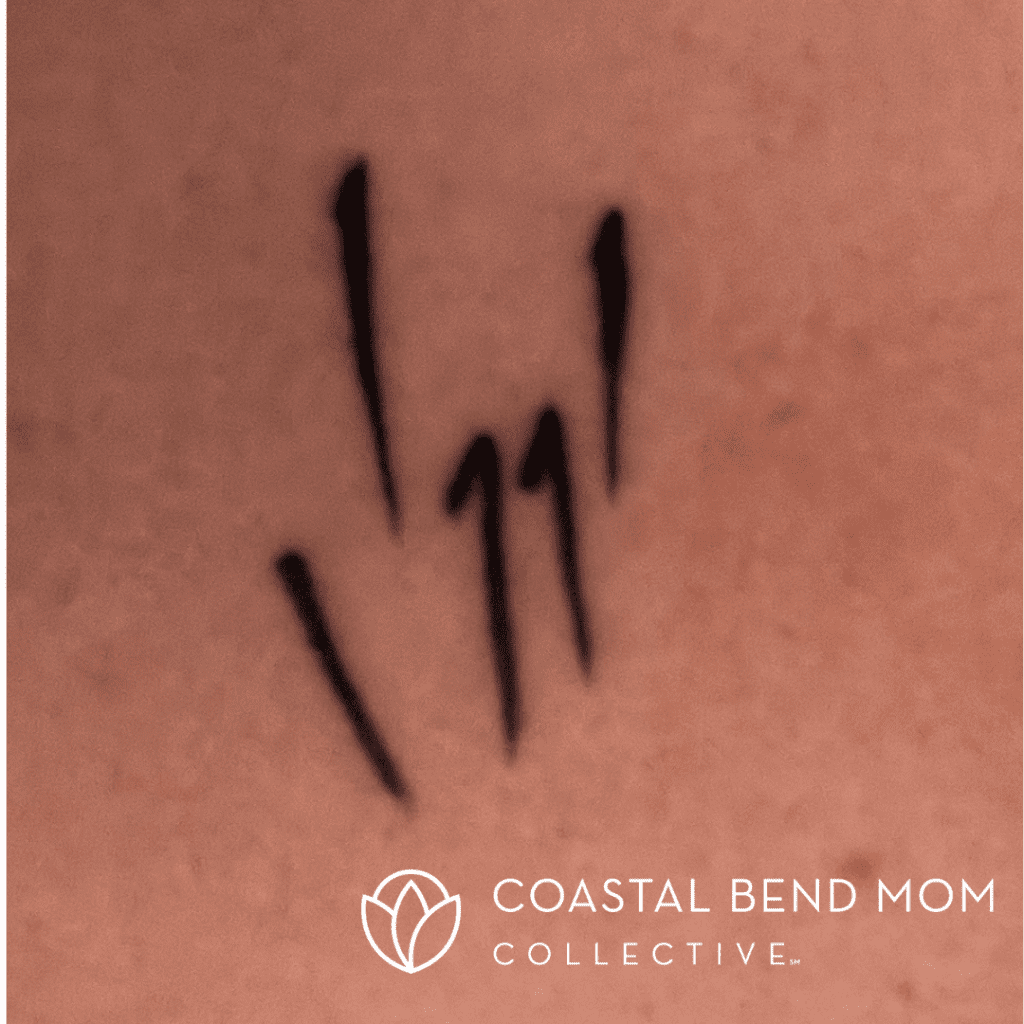 The fact that my first tattoo was physically drawn by Sierra is the best part about it.  I love that Michael was able to draw her design even with the exact pencil markings.

Louie decided to go with a simple anchor on his leg.  It has many meanings for him – mainly his life in the United States Coast Guard and being the anchor of our family. 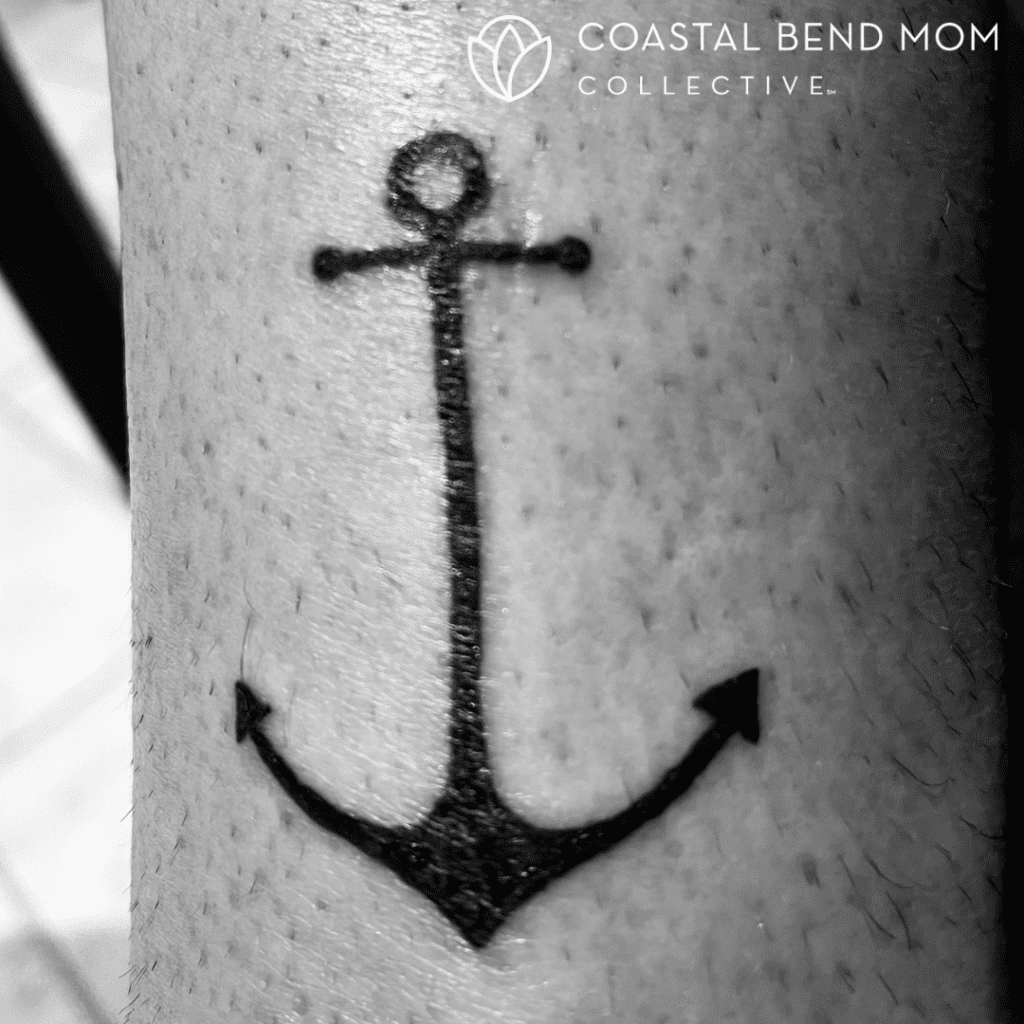 After getting the tattoo, you are advised to wash with antibacterial soap and not use fragranced lotions.  Pat dry with a paper towel (not cloth). Do not submerged the tattoo in water — especially a pool or beach.  Since our tattoos were pretty small – our recovery time is minimal (like a few days).

So, now I am planning my next tattoo.  This time I am wanting a phrase for my right arm between wrist and elbow.  As always, stay tuned. 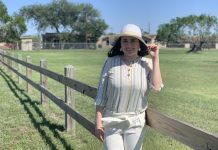 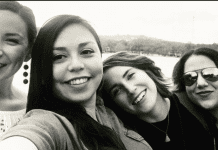 When You’re the Only Mom in Your Friend Group