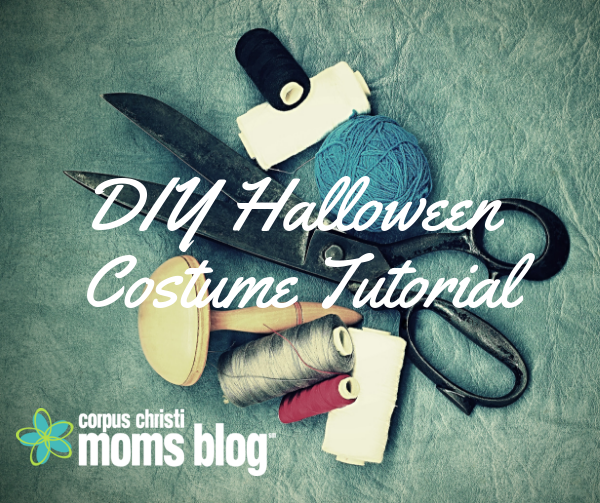 Let me start with a confession:

Like slightly obsessed. I love the creativity required to find items in thrift stores or my own closet and re-purpose them into costumes. Even before we had children, my husband and I took costume parties seriously. Maybe too seriously.

Exhibit A. Our first Halloween together as the American Gladiators. 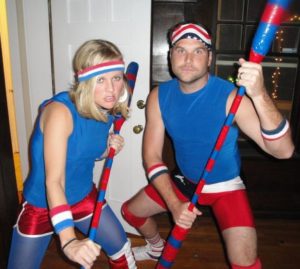 Exhibit B. Our second Halloween together as Macho Man and Miss Elizabeth. 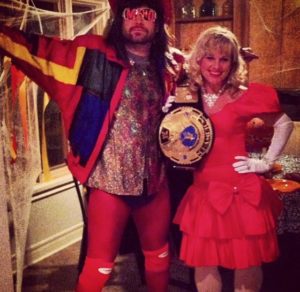 For costume and theme parties, I love piecing together just about anything and frequent thrift stores and buy items *just in case* we needed them for future parties. Once we had our first child, we both started making a list of dream family costumes, primarily 80’s characters and celebrities. I tend to “create” 2-3 costumes per child each Halloween depending on how many Trunk or Treat and other events we attend in addition to Halloween night. Now that our eldest son is four years old, he has strong opinions about his costumes and wants the traditional store-bought costumes, which may break my heart. However, I will try my best to compromise with him and keep up the DIY costume tradition for at least one costume each year.

In the past few years, I have learned a few tips for DIY/re-purposing Halloween costumes for the family, which I hope will help you as you plan for this year’s costumes.

Tip #1: Buy solid color basic items (shirts/onesies/leggings/shorts) and add costume detail with fabric markers and scissors. Yes, you can buy muscle shirts for superheroes, but you can also buy a plain shirt and add the muscle definition with a black marker. For Baby Hulk below, I purchased a green onesie and leggings online plus purple sweatpants at Walmart. I drew on muscle detail with a fabric marker and cut up the sweatpants to resemble Hulk’s pants. I also used an old wig we already owned and cut it short like Hulk. The entire costume cost less than $15. 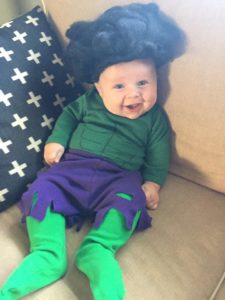 Tip #2: Buy small scraps of fabric at fabric stores to create key pieces in the costumes. I quickly learned that I did not need to buy accessories for all of the costumes, but I could buy small pieces of fabric and sew them into belts and headbands. Even if you don’t sew, you can easily cut the fabric into the shape you need. I usually start in the scrap bins at hobby stores and see if there is anything I can use from the sale supply. You’d be surprised what you can utilize. I made most of He-Man’s costume below from small scraps of maroon, grey, and yellow fabric. Much like Hulk’s costume, I bought Walmart sweatpants and cut them into shorts. For our little Johnny Lawrence of the Cobra Kai, I bought cheap black fabric, which I cut and sewed into a little vest, belt, and headband, added yellow piping, and then bought yellow felt and drew the Cobra Kai emblem on it. Once again, I bought basic black sweatpants from Walmart for his karate pants. It requires creativity and time, but is extremely budget-friendly! 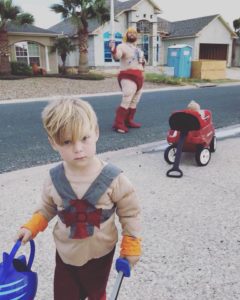 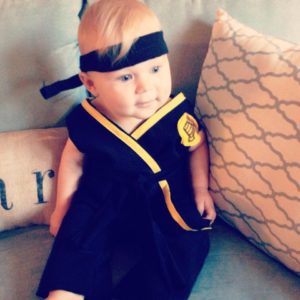 Tip #3: Utilize your local thrift stores. I love thrifting and have created a supply of items that I go through for each costume. I realize that not everyone wants a closet filled with costume and thrifted pieces, but we have spent years slowly adding to our collection. If you want something specific for your costume and don’t own anything similar nor want to pay full price, visit your thrift stores. I was able to find a perfect plaid skirt when my son went as Rowdy Roddy Piper, and I purchased a matching island-themed short suit at a thrift store months before Halloween, which I re-purposed into a “Tacky Tourist” costume. This past year, I purchased an old purple scarf and a witch’s hat that I spray painted to make the Orko (He-Man’s ghost friend) costume for my son. It just takes a little vision. 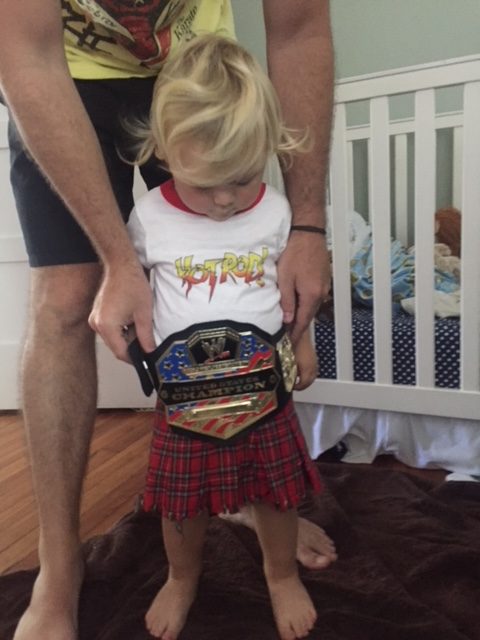 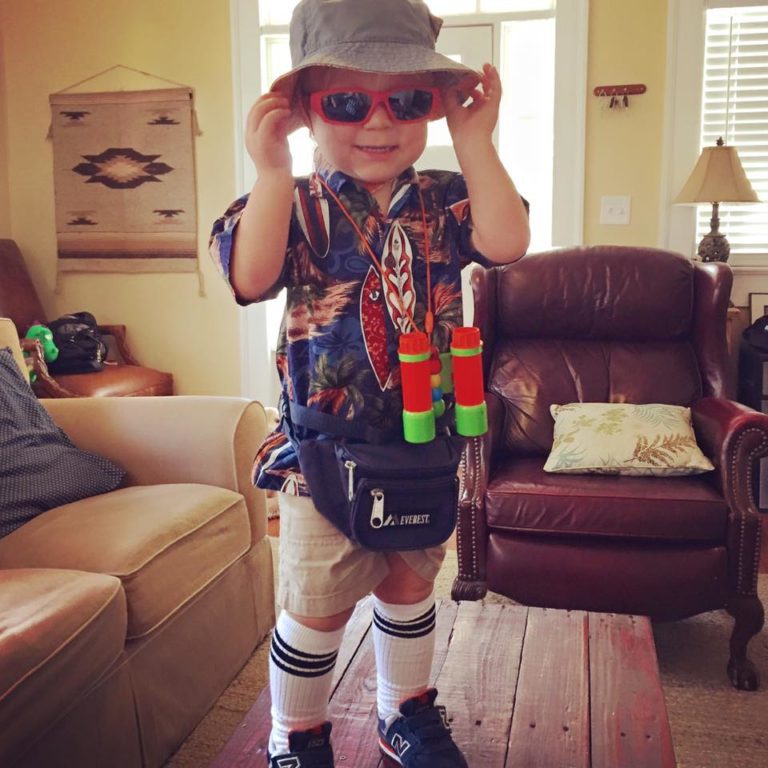 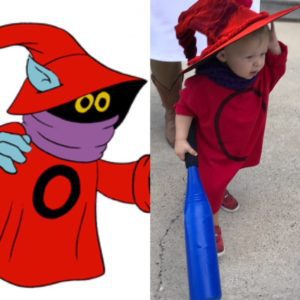 Tip #4: Use what you already own. Sometimes you just need to look in your closets with a new perspective. You can cut up old shirts and pants to create new items or you can pair items in new ways to create similar looks. One of my favorite last-minute costumes for my oldest son was Bruce Springsteen– so easy and used all items we already owned. For my younger son, we actually used several of the same items (red Converse, blue bandana, white t-shirt) and created a conductor costume using overalls we already owned. For some reason, we also already owned the conductor hat. Again, we tend to just have these items on hand. We used many of the same items for a later costume of Cubby from Jake and the Neverland Pirates. 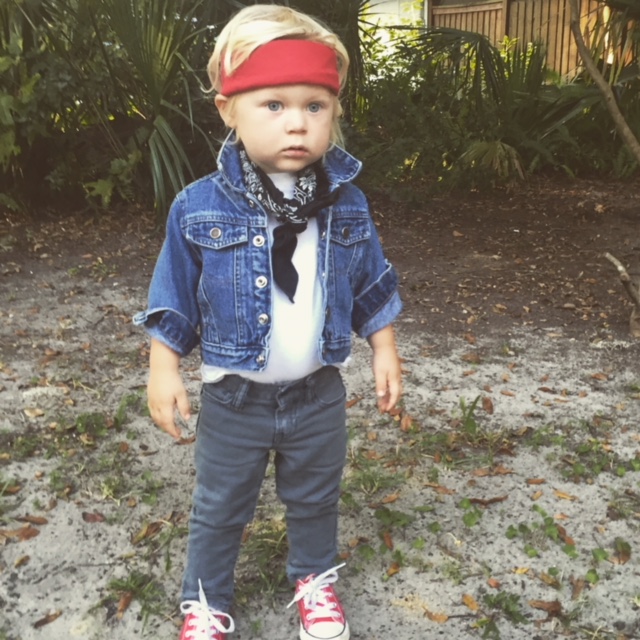 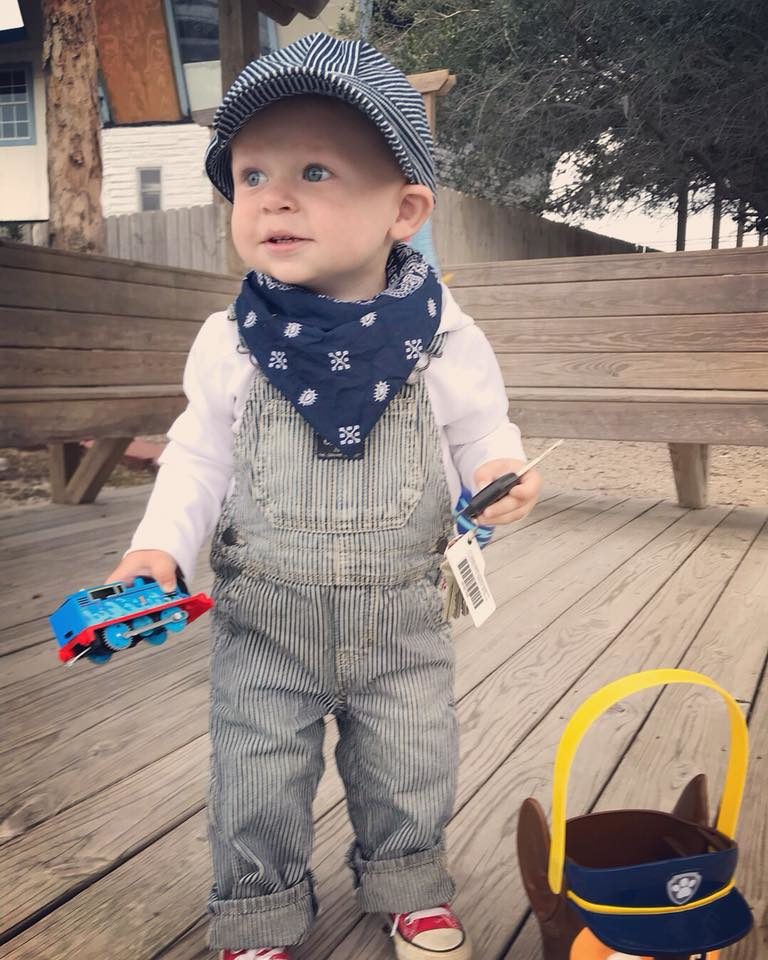 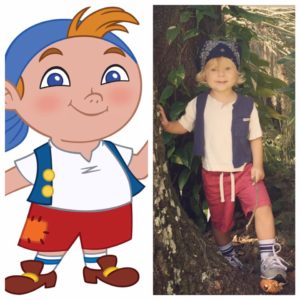 Tip #5: For additional accessories, visit Walmart or Amazon- don’t break the bank. Great costumes are often in the details- the little kid fanny pack and binoculars of the tacky tourist above or the random assortment of bandanas needed for costumes. Sometimes it is cheaper and easier to buy items rather than make them. For my son’s Batman costume (before he discovered store-bought ones), I bought the cape and mask at Walmart but created the rest of the costume on my own (cheap black pants and long sleeve shirt with a felt emblem quickly sewn on the shirt, cheap yellow fabric to create a belt). A costume can still feel homemade, which I consider a good thing, even if you need to purchase specific items. 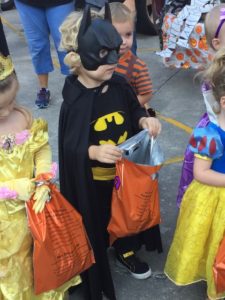 My husband and I spend more time than we should admit planning our family’s Halloween costumes, but we love the holiday and any excuse to dress silly and eat lots of candy.

What are your DIY tips for creating Halloween costumes? What has been your favorite DIY costume for your children? 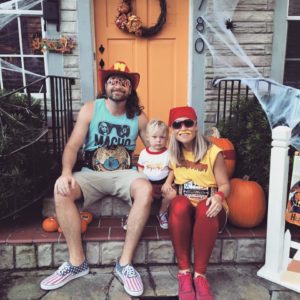 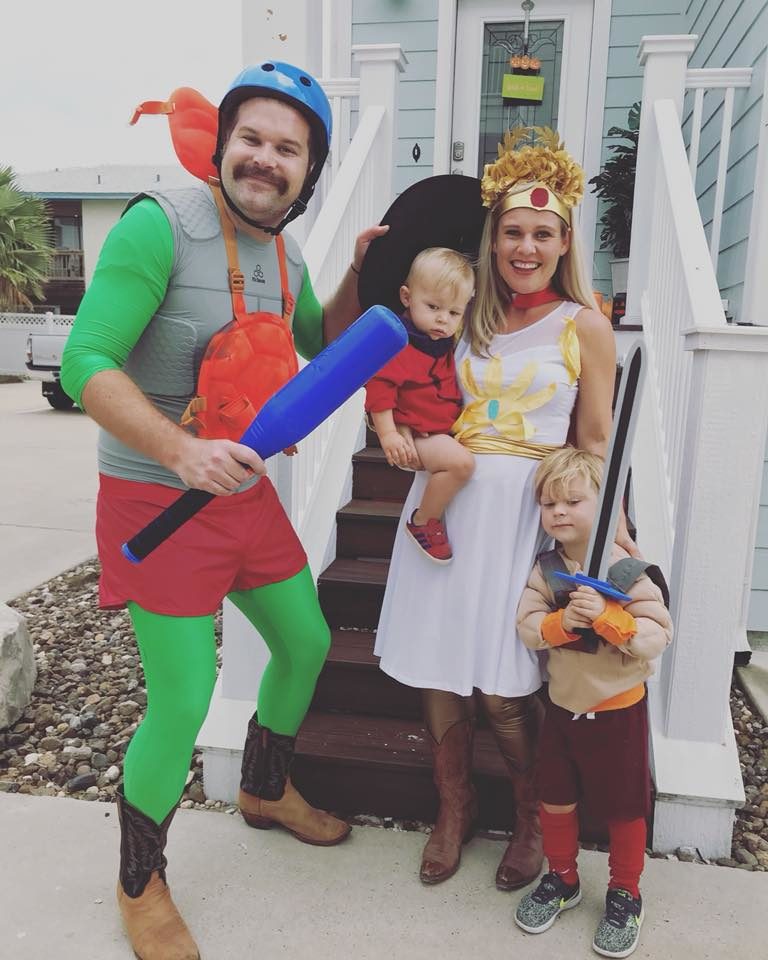 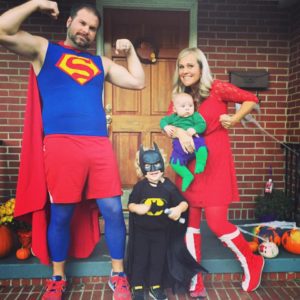 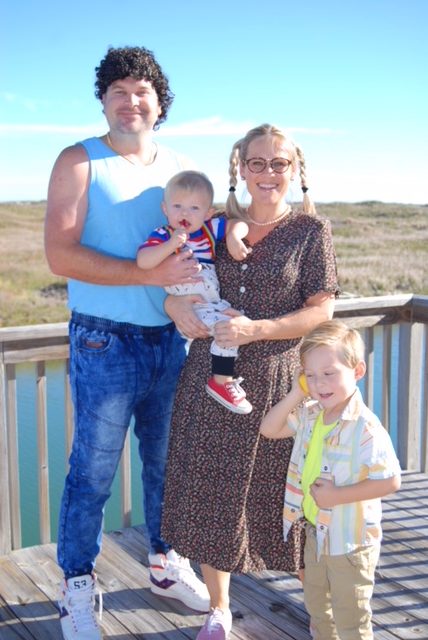 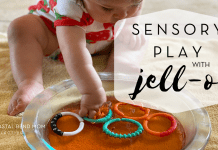 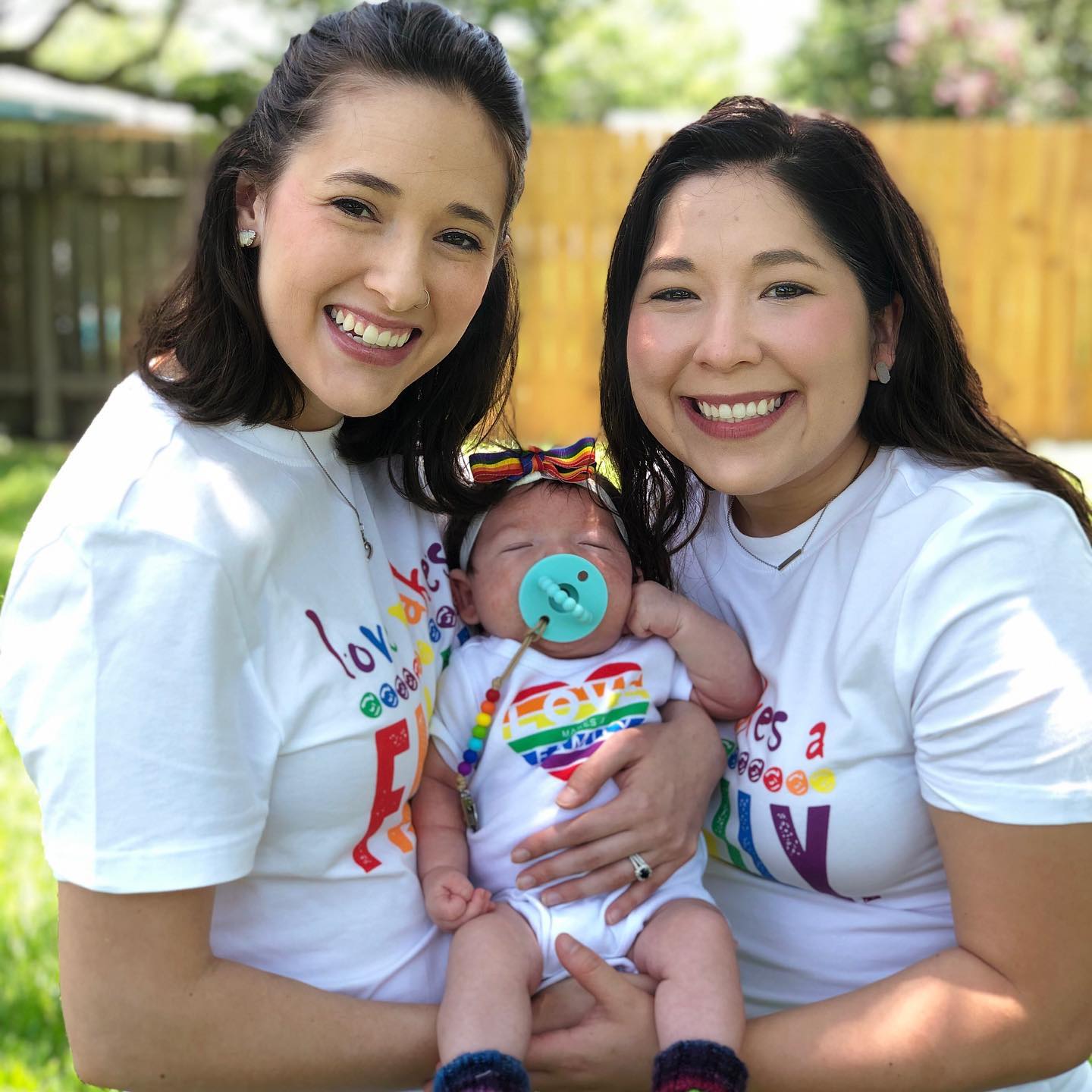